Why do you love me?

Why do you love me?

Suppose to take place after Neeva but before Gus.

That last house with the children tugged at Quinlan’s heart. He feared his human side was exposed, as he and his team entered another house to rid the world of the unclean.

Another family was released. As his team cleaned up he heard a faint sound. He followed the sound he found a dead cat family, he made sure they were apart of the clean up. But the sound was a little louder. He readied his gun, then he found it...

A smokey grey kitten, alive but scared. The team came up from behind and they scared the kitten, but the creature didn’t hide. He ran to Quinlan!

"No, feline. You can’t stay here and you can’t come with me.” Quinlan spoke sternly but the kitten whined and cuddled his leg.

Quinlan started to walk away, but the kitten followed mewing, loudly.

“NO” Quinlan yelled, but the kitten wasn’t scared. He purred, leaning on Quinlan’s leg. Quinlan scooped up the kitten and brought him to the hideout. He layed on his bed and the kitten curled up on his chest and purred. “Why do you love me, Pompeii? I can’t keep you.” Quinlan cooed. He thought why did I name the creature when I can’t keep him?

Pompeii just purred and before long Quinlan fell asleep and purring with him. 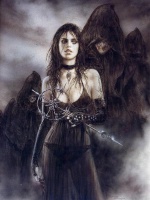 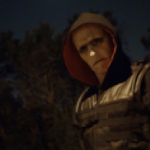 I wanted him to name the kitten after something in his childhood and I figured the Pompeii disaster was big news when he was a child and alittle dark.